How Often Should You Review Your Will?

Did you know that your Will or estate plan should be reviewed periodically?

One of the frequent questions people ask me, is how often they should review their Will or estate plan? This is a great question!

Any Will or estate plan should always be reviewed periodically. There is no special rule for how often, but here are some useful tips you can follow:

1. Plan on reviewing your Will or plan with your attorney every 15 months.

2. If a significant event occurs in your life or family, schedule a review meeting.

3. If a significant financial event occurs in your life, schedule a review meeting.

4. If you take your plan out and read it and find you don't like something there any longer, schedule a review meeting.

If you follow these tips, you will keep your Will and estate plan current. If you have specific questions on this or any of our topics, please give me a call or drop me an email. Thank you.
Posted by KOKISH & GOLDMANIS PC at 10:12 AM No comments:

5 Reasons to Avoid Doing Your Will On the Internet

While there are actually many more than five, here are the top five reasons to avoid internet Wills:

Most folks who attempt to create an internet Will miss one or more important questions or drafting issues rendering the document useless. If you are going to do a Will, why not have one that actually works?

As with most fill in the blank documents, the end result is a function of what goes in. Remember GIGO? That stands for “garbage in, garbage out”. Since most folks who attempt to use these are not aware of legal details that apply to estates the documents they create, while enforceable, create consequences that are not intended.

3. Internet Wills Don't Apply to You:

When a form is made general enough to apply to millions of potential users, it usually will not apply to you. This is why well drawn Wills are custom for each client.

5. Do You Really Want a Will from one of OJ's Attorneys?

The most popular internet documents are from a company started by one of OJ's lawyers. While he may be a good criminal lawyer, he knows very little about Wills and estate planning. Enough said on that.

What are your thoughts? Please join our conversation.

The IRS Is A Master of the Obvious!

The IRS announced today that the Form 8939 (more on that below) will not be due for filing on April 18, 2011. The reason provided by the IRS is not that the filing date has been extended, but because the IRS has not yet created and released the tax form for use by taxpayers.

Can there be doubt about why our tax system is such a mess? How in the world are people supposed to comply with a tax system that works in such a crazy fashion? Sorry, but I don't have the answers, I just wanted to provide you with the "through the looking glass" experience of dealing with our tax system and the numerous and complex forms that are required of taxpayers.

Now for Form 8939. Do you remember back in 2010 when there was no estate tax. It had been replaced with a new carryover basis system. The reporting obligations for that were supposed to be made on the new IRS Form 8939.

In December of 2010, Congress through those rules out the window (actually a very good result for taxpayers) by passing a new estate tax system retroactive to January 1, 2010. Under the new law, presently in effect, the $5 million exemption against the federal estate tax was made retroactive to 1/1/2010

However, since Congress passed the new law at the end of 2010 and since just a few people had died in 2010 expecting there to be no estate tax, 2010 estates have a choice. 2010 estates can elect to either go with the "no estate tax system" which is no longer law, or with the $5 million dollar exemption system which is now the law.

Estates desiring the "no estate tax" system, like the Estate of George Steinbrenner, are required to use Form 8939.

And as of today, 4/15/2011, per the IRS notice I am reporting on, that Form will not have to be filed on time (4/18/2011) only because Form 8939 doesn't exist since the IRS hasn't created it yet. By the way, I have the IRS draft Form 8939 in my possession. I can tell you that the reason there is no Form 8939 is that the IRS doesn't yet understand the new tax law passed by Congress and how the optional carryover basis system works. That's ok, no one else does either.

If you haven't yet, get those quarterly estimates in and remember tax day for 2011 is April 18th.

Let me know what you think about this article and join our conversation by commenting. Thank you.

Where There’s a Will There’s No Way, Many Americans Say | Advisor One

I found this article to be not only surprising, but shocking as well. I encourage you to read this, and let me know what you think.

Where There’s a Will There’s No Way, Many Americans Say | Advisor One

To think that so many people would rather have a root canal or give up sex before making a Will is just shocking. Does that say something about how they feel about their families? I'm not sure.

The second reason I wanted to comment on this article is my distaste for internet Wills. I have written several articles explaining the reasons you should stay away from internet legal documents, I don't repeat all those reasons here. I do however, encourage you to read those prior articles before entrusting your own estate plan to the internet.

Let me know what you think, as I hope you join our conversation. Thank you.

In the deficit reduction plan announced by the President today, your estate tax exemption just vanished.

The President's announced plan would make the $1 million exemption permanent. This is a drastic increase in federal estate taxes resulting from an absurdly low exemption of $1 million and a top estate tax rate of 55%.

What is your take on this announcement? I don't know if the President has the votes in Congress to get this through, but if passed, it is a disaster for your family.

Please read the article below:

Obama Lays Out Plan to Reduce Deficit by $4 Trillion in 12 Years | Advisor One
Posted by KOKISH & GOLDMANIS PC at 1:53 PM No comments:

The Phrase "Estate Planning" Causes Different Reactions: What Do You Think Of?

Recently I asked the above question by posting on several social networks. As you might think, there was a variety of responses.

One of my friends actually responded that the phrase “estate planning” makes him think that I am posting again! In this article, I list some of the more prevalent and interesting responses and again ask for your thoughts.

It has always interested me how people who are not immersed day to day in estate planning think when they hear that phrase.

1. When I hear “estate planning” I think about a Will. 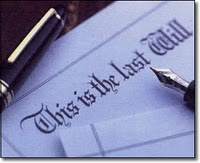 This is the most common response and one that I think of as well. Is that what you thought of?

2. When I hear “estate planning” I think about my family.

This is my favorite response and the one I suggest to all of my clients. To me estate planning is about family and family represents the reasons people plan their estates.

3. When I hear “estate planning” I think about taxes.

It is true, for many, thinking about their estates brings up thoughts about taxes. The impact of taxes on estate planning is a function of the size of the federal exemption against the estate tax, not a subject for this article.

Those are the three most common responses that people have when I ask them what comes to mind when they hear, “estate planning”. What comes to your mind? Please respond and share your thoughts on this topic and join our conversation.

Posted by KOKISH & GOLDMANIS PC at 2:49 PM No comments:

Do you favor the death tax?